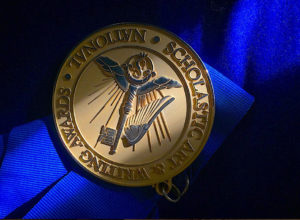 The following story by James Blume ’19 won a 2014 Scholastic National Gold Medal for Flash Fiction. A multi-genre writer, James was a finalist in the 2017 NJ Young Playwrights Competition, won a 2017 NJCTE Bronze Medal for Poetry, and had a personal essay published in the April 2017 national print edition of Teen Ink Magazine.

I was eight years old when I first saw my brother hurt an animal. We were at our summer home and I was still recovering from the end of the school year. My brother was four years older than I was and had just finished sixth grade.

That summer my brother was obsessed with traps and was always talking about how to ensnare an animal. He said it was simple. Get a string of metal wire and tie it like a noose. Make sure to leave the hole slightly larger than the animal’s foot. Once the animal steps on the trap, its foot will get stuck. The more the animal tries to escape, the tighter the noose pulls around it. The animal will rely on instinct and keep on pulling the wire and the wire will keep on digging into its skin.  The animal will be completely trapped.  Of course, my brother was smart enough to never say these things to our parents. But I heard them.

I listened to my brother. I knew he wasn’t being silly or joking around. He was too serious. Despite all of his mad talk, I never told Mom or Dad about what he said. If I did that, he wouldn’t talk to me anymore.  He would just say that brainwashed crap that he repeats to teachers or our parents.  I wouldn’t be able to see the real him anymore.

Mom, being a big believer that kids should be outside, forced me from the comfort of the computer into the backyard every day that it didn’t rain.  After looking for other kids to play with and finding the neighbor’s home empty, I went looking for my brother.  I found him in his normal spot in the center of the woods behind the yard of one of our neighbors.  The woods only sprawled back a couple hundred meters, but when in the center, you can’t see outside of it.  More importantly, you can’t see in.  From the isolated center, the woods appear to be a forest, the trees reaching out in all directions. My brother said it was like a Robert Frost poem, “lovely, dark and deep.” I didn’t like this spot in the woods because of that, but I tolerated it because it’s my brother’s favorite place.

My brother was crouched by one of the homemade traps he described.  To my surprise, he had caught something.  A rabbit, shuddering in terror, its chest panting from fear, pulled desperately at its leg.  The trap worked exactly as my brother had told me: the little metal wire ensnaring the rabbit’s leg like a metal anaconda. A red stained circle marked the white fur where the leg was trapped. The dirty white rabbit was visibly shaking, but my brother didn’t seem to notice — he just kept petting the rabbit softly, telling it to calm down.

“It’s alright. The pain you feel now is only temporarily, but the freedom you gain will be forever.“  He spoke so softly.  So relaxed. I continued to watch him from the bushes. He hadn’t seen me yet.

“You don’t understand now, but you will be grateful after this over.”

My brother reached into his pocket and pulled out a knife. It was the Exacto knife that our parents bought him for a summer art project. My brother had showed it to me before.  He told me when cutting with a knife, you should always cut away from you.  He showed me how to properly cut on a square of cardboard.

He started to hum “London Bridge” as he uncapped the knife, carefully placing the cap in his coat pocket. The purple grip naturally fitted into his hand. I felt cold. I left as he held the rabbit, blade in hand.  Totally focused on the rabbit, my brother didn’t even look up at the noise I made when I ran home.

During dinner, I saw him.  We were having our Sunday family dinner.  Our parents kept the conversation going, asking the usual fluff. I told them about how the neighbor wasn’t there.  I thought about telling them about what my brother did. How he killed that rabbit.  How he isn’t the kid you think he is.  I didn’t though.  I wasn’t sad or surprised about what he did.  Anyone who talks to the real him could have realized what was destined to happen. It wasn’t a secret at all.  Why tell our parents now and not before when he was talking about trapping animals?  Is there really a difference between thought and action?

This entry was posted in Fiction and tagged students. Bookmark the permalink.