PAX Rwanda: Embroideries of the Women of Savane Rutongo-Kabuye, an exhibit of vibrant embroideries created by Rwandan artists was featured in the David Teiger ’47 Gallery for the Studio Arts at Newark Academy from September 4 – October 8, 2018. The exhibit was comprised of elaborately rendered scenes of Rwanda’s culture, its people and the beautiful animals of West Africa. Bogota resident Juliana Meehan discovered the embroideries as a tourist to Rwanda in 2010 and curates the collection. In addition to showing the work, Meehan shared her stories of these artists and her experiences in Rwanda with Newark Academy students.

PAX Rwanda is the artistry of the women who are survivors of the 1994 Rwandan Genocide against the Tutsi.  Their original approach to embroidery, using three different colors on one needle, is unique to this workshop and was pioneered by its founder and artistic director, Christiane Rwagatare. Their painstaking technique subtly blends colors and brings their compositions to life, creating with needle and thread what the painter does with brush and paint.

These three women epitomize the women of Rwanda, past and present, who stylishly wrap themselves in kitenge sarongs with elaborate head scarves, and often swaddle their infants in them as well. Kitenge fabric is made by drawing a succession of patterns in hot wax and dying them different colors as each stage, a technique commonly known as the label “Super Wax.” Look for this detail in the hem.

A beautiful Rwandan woman is rendered in exquisite detail. Clad in orange and gold, she fingers her beads and gazes ahead. Fabric softly frames her head. This piece is a tour de force of the Savane Rutongo-Kabuye embroidery technique. 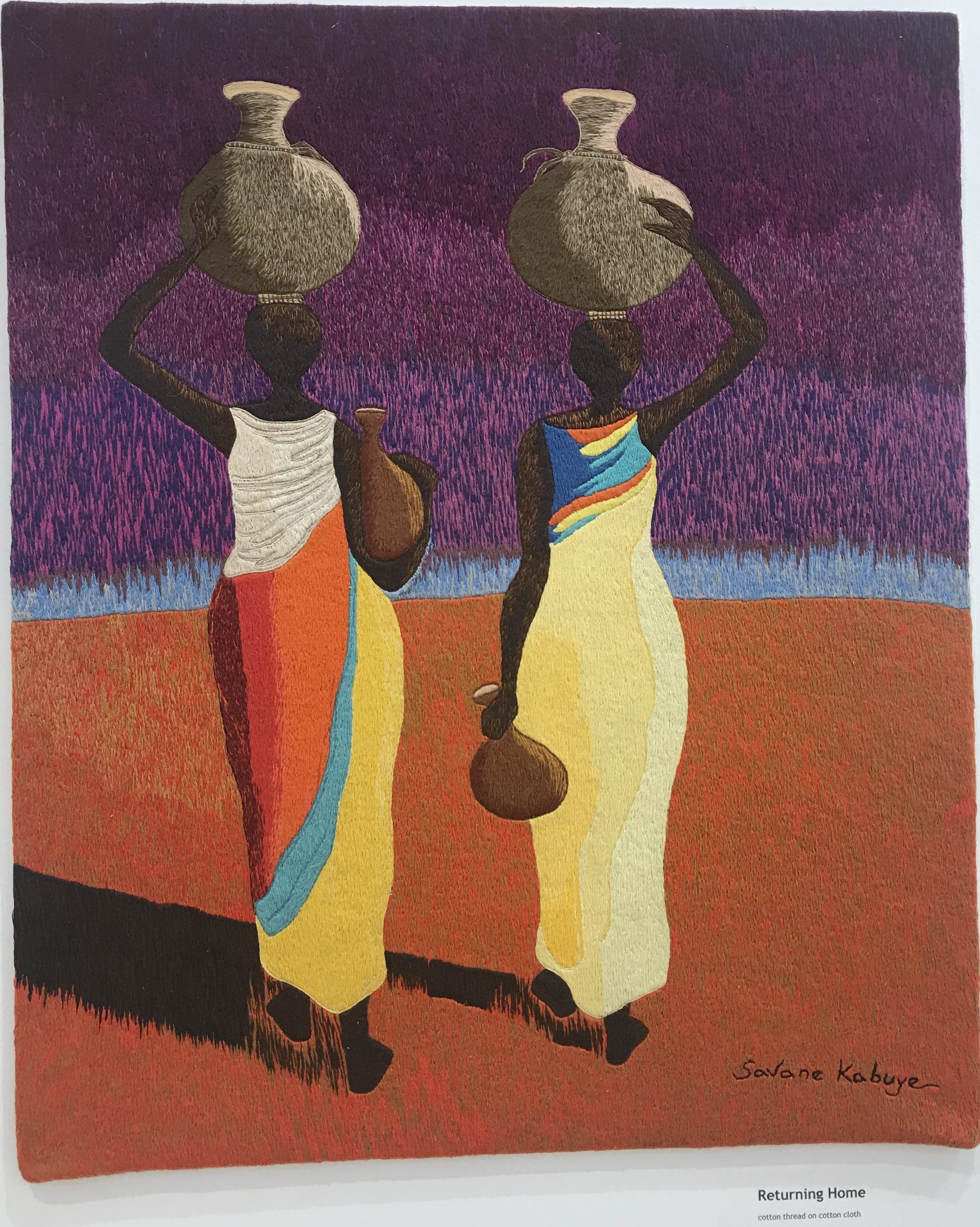 Two women return from the market carrying baskets of goods on their heads, a practice that continues today. This embroidery is marked by rich colors and a simple, elegant design. 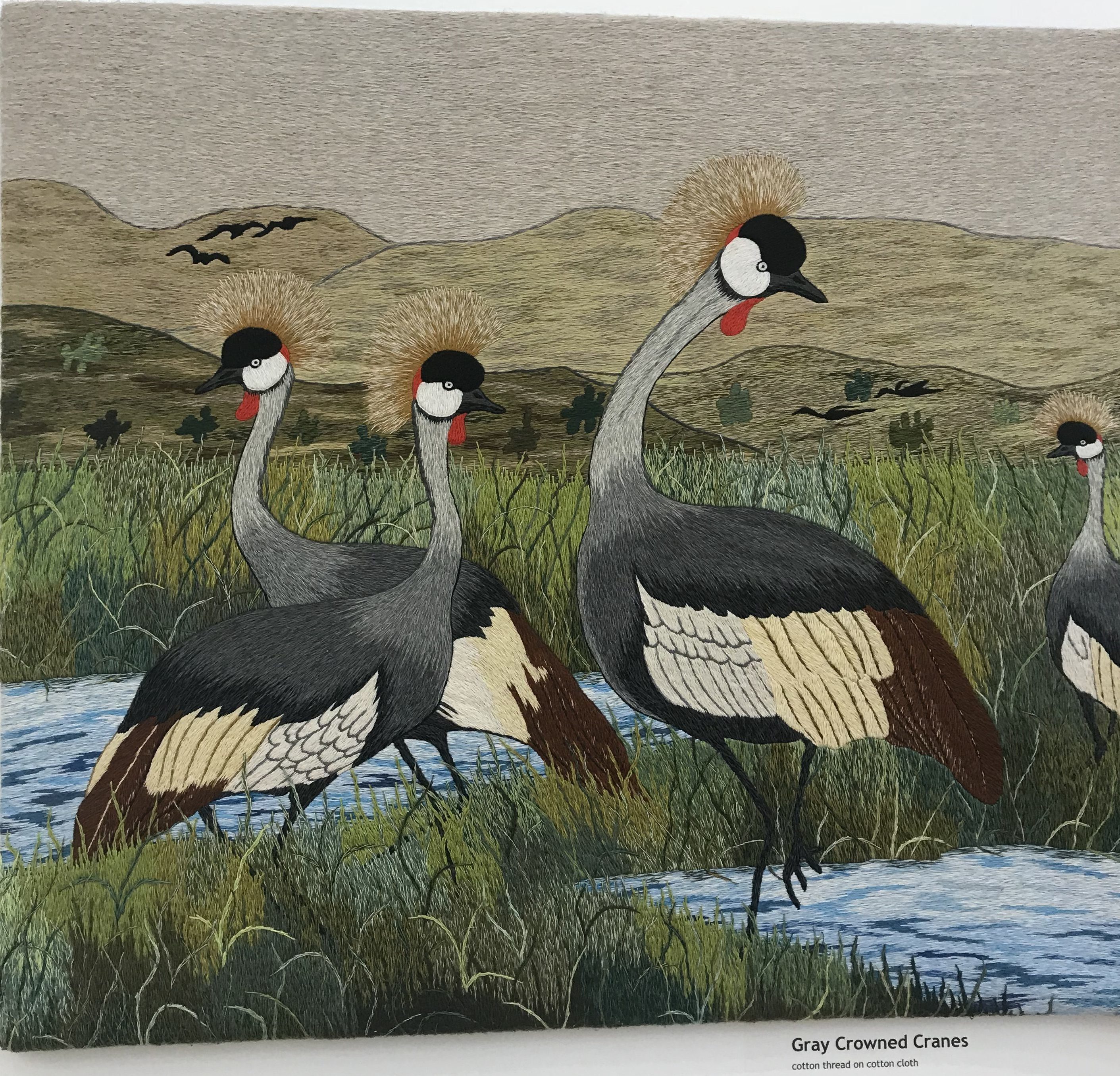 Grey crowned cranes wade in a blue river rich with vegetation. They are common throughout eastern and southern Africa but are threatened due to habitat destruction, livestock overgrazing, pesticide use, and hunting. It is a common practice in Rwanda to keep grey crowned cranes, which never breed in captivity, as pets. Conservationists fear the species may disappear if these practices continue. Rwanda has recently begun a program to confiscate pet cranes and re-introduce them into the wild. 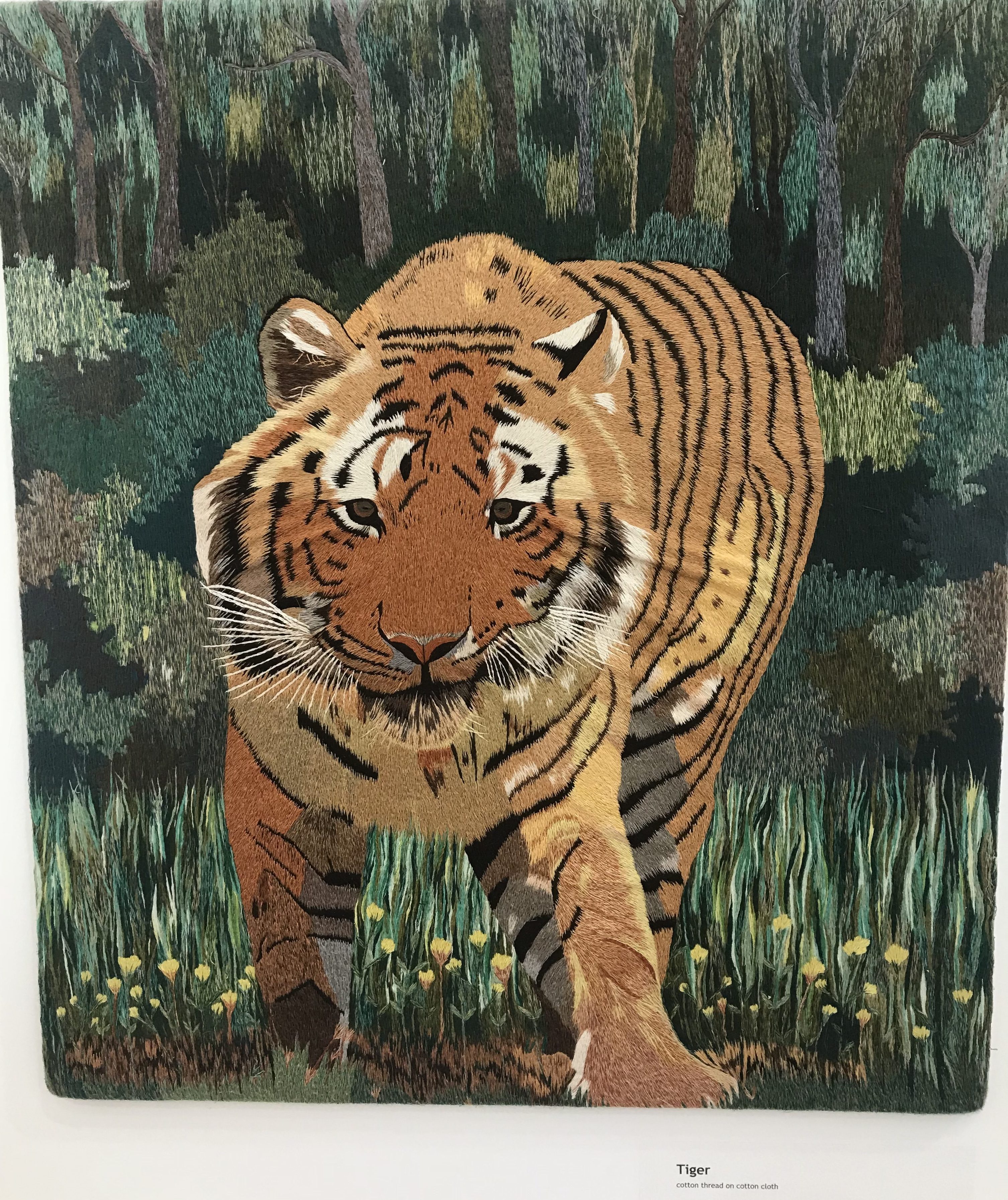 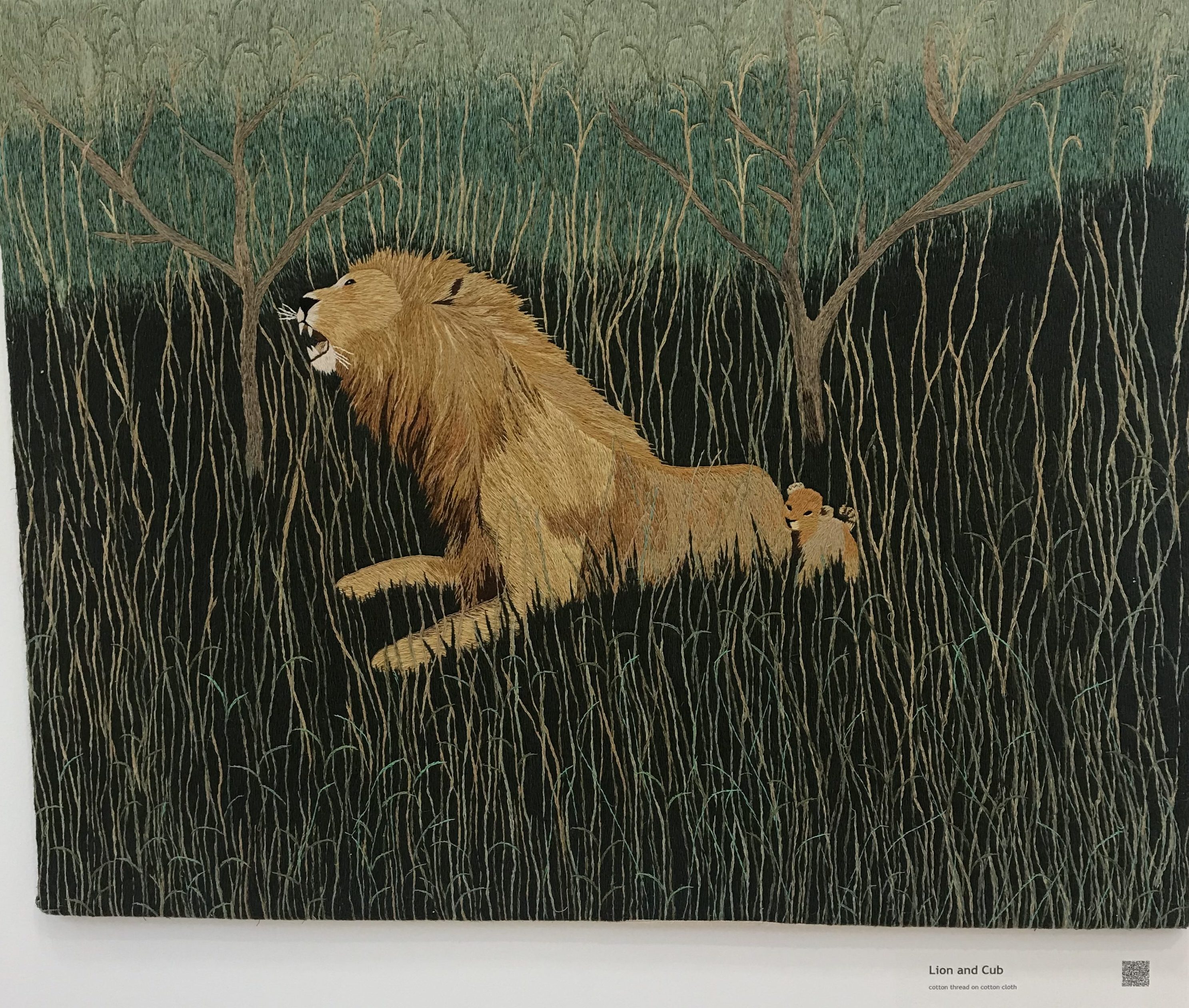 The two-dimensionality and styled mille-fleur background of this composition is reminiscent of a medieval tapestry. Lions originally roamed Rwanda, but all were wiped out during the genocide. A pride of seven lions from South Africa was successfully introduced to Rwanda in 2015 through an international effort. They have produced several healthy cubs.

This is how all the embroideries start out – with a simple pencil sketch on sturdy, unbleached cotton. Such a preliminary sketch is known to artists as a “cartoon.” 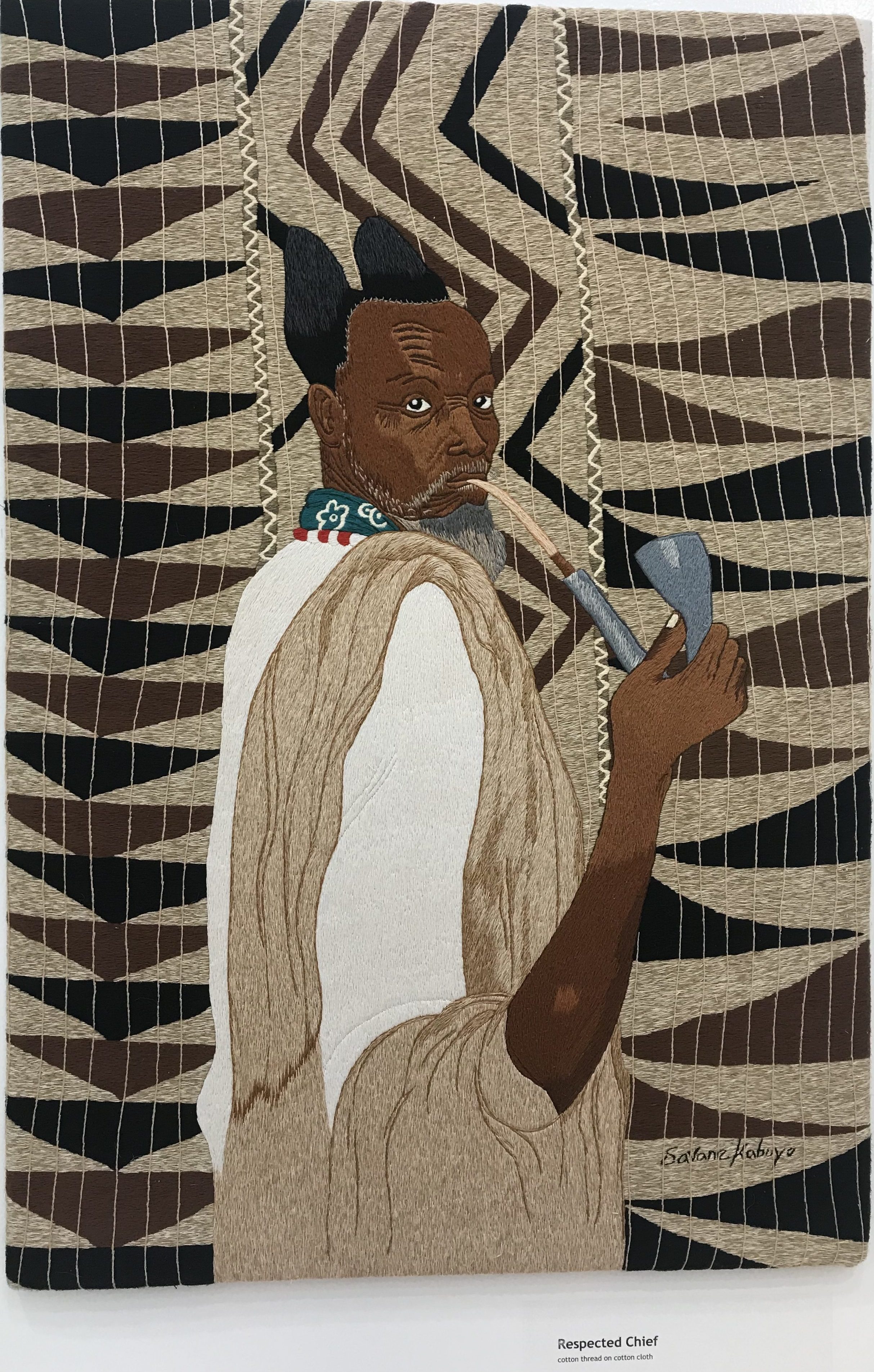