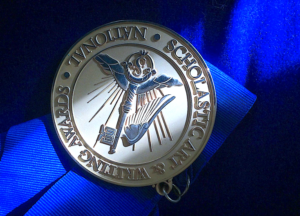 The morning of her death, Mrs. Abernathy of Apartment 22A of Sheridan Road wakes up before the light hits. The first thing she does is open all the windows and take a deep breath, for a woman who cannot see only feels alive when she breathes.

Her house is simple and pragmatic, and in that way it suits her. The single story duplex has nothing in it, and most people believe that nobody lives there. Oftentimes, the family next door will help her out– she pays the young one to do the grocery shopping for her, and the mother sends leftovers as a courtesy. Shivering, Mrs. Abernathy shuffles towards the kitchen, where there is breakfast already waiting for her. In the slow way that all elderly do things, she eats the oatmeal carefully, her thin fingers shaking around the spoon as she lifts it toward her mouth. Each time, she sinks the spoon into the bowl, oatmeal spilling over the edges. Each time she brings it to her mouth, there is almost nothing left.

Eventually, Mrs. Abernathy finishes her oatmeal, washes the bowl out, and places it on the dishrack. The sun has risen by now, and the frail woman can feel the warmth on her hands as she sits on her bed and puts on a record. The music fills the room in a way that Mrs. Abernathy is still left hungry. It’s an old song.

There is not much for a blind woman to do but think.

“Ah, come over darling, you can put the bags up on the counter,” she says. There’s a rustling noise in the kitchen. She hears the padded footsteps turn into her room.  “Do you have time to stay?”

She hears the figure settle onto the chair in the corner of the room.

“School is going well, I presume? Don’t spend too much time thinking about it. I remember when I was a young girl, some years younger than you, my father was stationed in Kolkata for some time. That year, my mother told me that if I got good marks on all my exams, we were going to take a trip to Delhi for my summer vacations. So I studied hard and she assented—in that way good marks can do well for you. The train there—it was marvelous—I had never known India to be so beautiful in such a diverse way. If you ever have the chance, dear, take a visit. I promise you there is so much more to the world. All the things that I have learned, I have learned outside of this town.”

Mrs. Abernathy pauses at this, and the music seems to fade back into the foreground again. In that moment, Mrs. Abernathy feels a loss unlike any other. She wishes for the chance to re-experience that feeling, that one feels when they are young, when they see the sheer grandness of the world for the first time. She sighs, then turns her head in remembrance.

“It was strange, actually, that trip. As we entered the platform, this man grabs my shirtsleeve. A beggar. He looked me in the eye—it should have been frightening, but instead it was just a bit unsettling—and he said, ‘Do not waste this,’ in perfect English, and he let go of my wrist. I gave him 10 paisa and he looked up and praised God.”

Mrs. Abernathy then looks down at her own wrist and puts her other hand around it in a ghost of the motion that happened over eighty years prior. She hears the girl shift impatiently.

“I thought nothing of it until a train arrived at the platform, and I saw the same man through the grid windows, in a suit and tie and gold watch sitting in the car, reading the paper. I suppose I found it bizarre, but it was India and there are so many men in India that it would not be inconceivable that two look the same. As the man in the suit exited the train, he dropped a figurine in my palm—one of their gods, I think. And on the platform, I saw the beggar again, and he waved to me. I think I waved back. And my father led me onto the train and I never saw either of them again.”

Another gust of wind enters the room. Mrs. Abernathy shivers.

“I don’t know what it means. Sometimes I think the moment so surreal that I made it up in my mind. But I know this–nobody but God can be two people at once.”

She hears the girl get up. Mrs. Abernathy tries to shake her hand, but misses.

When Bailey Curtis of 22B Sheridan Road comes to drop off her neighbor’s groceries, all of the windows are open. Bailey puts the plastic bags on the floor and grabs the fifty-dollar bill on the kitchen counter. It’s almost dinnertime—Bailey can barely see where she’s going. Underneath her rustling, there’s music playing.

Bailey follows the music into her neighbor’s room, and she sees the elderly woman on her bed. The woman’s eyes are open and soft, pointed towards the crumbling ceiling. Brushing away fallen plaster, Bailey moves to check her pulse. Touching her fingers to the soft flesh under the woman’s wrist, Bailey feels nothing.

She moves her fingers to Mrs. Abernathy’s hand and lays it gently against the other. A plastic figurine falls from the old woman’s hand to the floor.

Bailey picks it up. It’s Vishnu, the Hindu god. The paint is chipped and the divots of the cheap plastic scratch her fingers, but there’s a profoundness to its modest appearance. She puts it back, cupped between the woman’s hands.

The curtains stir, ushering in a new gust of wind, and Bailey swears she sees the dead woman shiver.