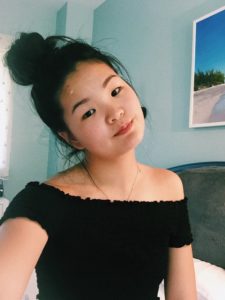 After graduating from Newark Academy, Antonia Park ’18 took a gap semester from Middlebury College to walk el Camino de Santiago in Spain and do volunteer work in Bali. While at Newark Academy, she attended the Alzar School, a semester program in Idaho that included backpacking, kayaking and a 6-week cultural/wilderness immersion in Chile. A first generation American, she loves her crazy Korean family. She is passionate about minority rights and believes that all feminism should be intersectional, because “everyone deserves a chance.” Her blog is called “Tonzy’s World.”

To All The Movies I’ve Loved Before:

The Importance of Representation in Hollywood

as featured in TONZY’S WORLD

The other day, a new friend of mine told me I had beautiful eyes. It was only when she said this that I realized in my eighteen years of existence on this planet, no one had ever complimented my eyes before. To me, that is not the saddest part of my epiphany; the saddest part is that I was almost rendered speechless. My whole life, I have been taught to believe that to be beautiful, eyes must be large, round, and blue/green—or at least one of the preceding traits. I had come to understand that my narrow deep-set ebony eyes were just never going to be seen as beautiful, and that that was just the way it was, something I could not change. It was hard for me to believe that someone of a different racial background than myself looked at my eyes and even thought twice of them. Never before had I seen how deeply intertwined societal ideals of beauty were—and still are—in my thoughts. We all like to believe that our conceptions of beauty are fully our own, and to some extent they are unique to us as individuals, but no one is immune to society’s influence. Society is built on the premise that we as a community are capable of more than the sum of each person’s abilities. Every society needs leaders to function, and who as well as what those leaders are matters.

Growing up, I rarely saw people that looked like me in the media. In the shows and movies that I watched as a child, the Asian female characters were always either the friend, the tutor, or the quiet awkward one. Because I never saw people like me as the protagonist, I felt like I was not worthy of the spotlight—that all I would ever be was a chapter in someone else’s book. I became someone who avoided being the center of attention at all costs. I think actress and activist Yara Shahidi said it best:

“Good, bad, or indifferent, TV helps to define our collective reality. And if a child grows up never seeing themselves represented as successful or as the hero, then they are the anomaly if they succeed and the expectation if they fail.”

The reason that fiction is so compelling, is that people see themselves in the characters—they start to feel like they really know them, which leads them to become invested in the storyline. When people of color do not see people that look like them playing vital characters, we start to believe that our stories have less merit, and ultimately, that we matter less. I grew up believing that I could never be the boss. How many East Asian fortune 500 CEOs are there? Zero. I am expected to be demure and obedient; people look at me and assume that I lack leadership skills. When strangers see the way that I look like as I walk down the street, they think that they know me. I realize now that it is entirely possible for me to achieve my goals, I am just going to have to work twice as hard as if I were a white male, and that is just the way it is right now. I think that the most important thing is for POC, for girls, for LGBTQ+ people, for people with disabilities, for everyone that has it tough, to believe in themselves and their capabilities.

Seeing Lana Condor star in To All the Boys I’ve Loved Before, as well as Constance Wu in Crazy Rich Asians overwhelmed me with joy in a way that is difficult to put into words. To see Asian women not only as the lead, but playing characters that were relatable, likeable, and desirable had me in tears. I had already fallen in love with Jenny Han’s novel years ago, so seeing it adapted to a film was incredible to witness. I love the way Constance Wu defines diversity:

“[Diversity] doesn’t mean we want the white people to write Asian stories. What I want is to foster the Asian-American writers and directors and producers and actors…foster their stories to come into the spotlight a little bit.”

The prevalence of white actors portraying ethnic characters is not only upsetting, but deeply offensive. We must fight to put an end to the Hollywood whitewashing that makes minorities feel like we are not even enough to play roles that were specifically written for people who look like us. The fact that in 2013, 93% of film executives were white is simply not okay. We do not only need to see diversity on the screen, but in the scripts, behind the camera, and on the crew. Minorities should get to tell their own stories both fully and authentically.

In an interview, Lana Condor said that when she decided that the next step she wanted to take in her acting career was to star in a Romantic Comedy, her thought process was:

“I kind of wrote it off a little, because I just don’t really know any rom-coms that want Asian Americans to star in it. And literally a week after, I got the audition for To All the Boys I’ve Loved Before. I was like “What?” The lead is written as an Asian-American girl. That blew my mind because I’m telling you, I never see that. It was such an empowering moment for me. The opportunities are out there. I am hoping this film inspires Asian American girls that they can star in their own rom-com.”

I teared up watching this interview because I felt it on an emotional level. I had come to the conclusion that I would never see Asian American girls as pretty, charming characters. My mother pointed out that in the movie, Lana’s character, Lara Jean Covey, is seen as beautiful for who she is, not for looking like, or trying to be like a white person. Lara Jean is captivating because the viewer gets to see various aspects of her personhood as her character overcomes self-doubt and obstacles throughout the bildungsroman. By seeing her as the goofy Korean yogurt drinking girl, the thoughtful yet playful sister, and the list making, back pocket loving intellectual, we fall in love with her right alongside Peter Kavinsky. Watching a fellow Korean-American woman like Han succeed prominently and exceptionally in the arts made me feel like I can be anything.

With movies like Crazy Rich Asians and To All the Boys I’ve Loved Before reaching mainstream popularity, the shift in general perception of Asian Americans and Asia is palpable. People are beginning to understand that Asians can be more than smart. Being the “model minority” is often viewed as a positive conception, but it is more complicated than that. When you are Asian American, people look at you to sort out the money when the check comes, and they are unsurprised when you think calculus is fun. They are confused when you do not wear shoes in your house, or when you have reusable chopsticks and special bowls just for soy sauce. When I was younger I was self conscious about being Asian. I remember feeling anxious when my friends were staying for dinner, and self conscious to take my Asian food out during lunchtime. Now I think it is super rad that I am Korean: it is a special part of me that I will always treasure. I am in Bali right now, and the friends that I am with are quite surprised when people ask me “where I am really from” or tell me that “I look like China.” I do not even think twice about these kinds of remarks: they are quotidian and commonplace. My friends are shocked when I tell them that strangers say things like this to me all the time, and that I have learned to just ignore it. I have a basic understanding that no matter what, people are going to make assumptions about me based upon the way I look, and that is not something that is going to change anytime soon. I hope that I am able to show people that Asian Americans are people with just as much depth and richness of character as everyone else. We are having a moment in the media right now, and I am all about it.

It is vital for young people to see not only people like themselves, but a diverse group of compelling, multifaceted, and realistic characters on their screens. Our differences and our abilities to learn from each other are what make our relationships meaningful. I believe that to accept and to love each other for who we truly are is what is fundamentally unique to the human experience. As Indian philosopher and writer Jiddu Krishnamurti said, “to understand is to transform what is.” We should see minorities fulfilling a wide variety of roles, so that everyone can understand that the minority experience is not monolithic, and so that minorities can believe there is no one person that they are fated to become.

This entry was posted in Nonfiction and tagged #antoniapark, #tonzysworld, #yarashahidi. Bookmark the permalink.
Loading Comments...