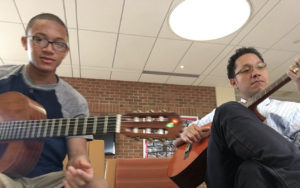 Cosimo Fabrizio ’18 and faculty member Alexis Romay enjoyed an impromptu jam session outside Kaltenbacher Hall. A member of Chameleon, Cosimo received an Outstanding Soloist Award at the 2017 Charles Mingus High School Competition and an Outstanding Guitar Award at the 2017 Essentially Ellington High School Jazz Band Competition. In October 2017, Cosimo performed as a sideman for Wynton Marsalis at the Mayo Performing Arts Center in Morristown. As a middle-school student, he was accepted by Julliard to participate in its highly prestigious, competitive Music Advancement Program (MAP) for instrumental instruction.

Over the years, I’ve listened to many versions of “A Day in the Life of a Fool” —also known as “Manhã de Carnaval” and/or the theme/song from the Brazilian film Black Orpheus.

Aside from Luiz Bonfá’s original, my favorite versions of the song oscillate between the ones recorded by Stan Getz, Vince Guaraldi, Dexter Gordon, and Astrud Gilberto… Now I have to add to that musical constellation the solo performed by Cosimo Fabrizio, ’18, during one of our recent impromptu jamming sessions, in which he delivers one minute and ten seconds of pure enlightenment. (To make it even more extraordinary, I must add that Cosimo had never played the song before that day.)

Every time I sit down to play music with Cosimo, I witness someone performing at his peek, and someone who is growing musically as he plays. The ease with which he approaches any improvisation makes it seem like Cosimo practices as he performs, and viceversa. Give him a guitar and watch the embodiment of the growth mindset that educators like to encourage in their students and amongst themselves.

Jamming with Cosimo is a joy, a challenge, and even a distraction. Let’s face it: how am I supposed to concentrate on the music I have to play when I have him right next to me traveling up and down the guitar neck with such effortlessness and grace?

Alexis Romay of the NA Language Department is the author of the novels Salidas de emergencia and La apertura cubana, and the book of sonnets Los culpables. He has translated  into Spanish several young adult novels and picture books. He translated into English the novel North of Hell, by Miguel Correa Mujica.