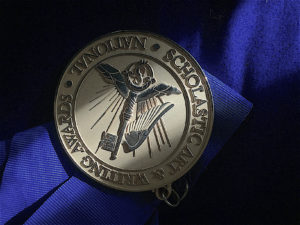 “Hero to Three” by Ava Sharahy ’20 earned a 2017 Scholastic National Silver Medal in Flash Fiction. In 2018 Ava earned a National Gold Medal in Poetry for her poem, “M,” awarded at a Carnegie Hall ceremony on June 2018. Of nearly 350,000 Scholastic entries per year, less than 1% earn National Medals. Enjoy this work by Ava.

In a forgotten corner of Kazakhstan lived a slice of Ukraine’s outcasts. They all escaped death by gunfire or hanging or imprisonment, only through cramming on a boat to what seemed to be safety. The children never questioned why they were living in secrecy, or why the friends and family that couldn’t make it to the boat never visited. A piece of home was created only through the memories of a past life, when being hunted down like animals was unheard of.

Only a six-year old boy named Shmul questioned this, asking his mother once why they couldn’t go back to Odessa to uncles and aunts and Papa. Sighing, she would just knead the bread for dinner, letting his words fly through her ears. She wondered, though guiltily, why couldn’t Shmul be more like the neighborhood boys: chasing after birds on the street instead of reading whatever the he could get his hands on, standing pale and sickly next to everyone else. It was only when Shmul was about to leave, defeated, she answered with looking at him:

“We’re safe here, Shmul. Unless you want to be hung up on a string like Uncle Abe and Aunt Annuskha back home.”

Shmul never liked asking his mother questions after that day. He preferred the stories his brother Solomon would tell, like there was some greater meaning behind their hiding.

“Papa’s fighting bad guys back home!” Sol would grin, holding a candle under his chin to look like an old Israeli storyteller in a cave-dwelling village, just like their ancestors. “He’s going to come back home soon, when the bad guys give up and we can go home! Even if he can’t go back home like Zhenya’s father, he’ll be a hero! Then, you can say you’re named after a war hero!”

Out of fear for a realistic answer from his mother, Shmul never went to her to question the accuracy of Solomon’s stories. Besides, he was the older brother, so Sol must have known their father for at least a year or two. More years than the younger Shmul could have ever known him. Not even pictures were hung up of the so-called hero: only locked in the depths of his mother’s closet.

Only when Shmul was shifting through his mother’s bedroom to find something to read did he find an old shoebox, filled to the brim with yellowing papers in hasty Russian cursive. They were letters all sent back to Shmul’s mother, all addressed to his father. There was one exception, though, and it intrigued Shmul the most: it was written through a typewriter, and the only one Shmul’s mother ever received back. It was also the only piece of writing Shmul could never finish, only being able to read up until:

“Our doctors record that your husband, SHMUL SMOTRITSKY, was reported deceased due to heart failure after his first battle with the Germans’ soldiers.”

Shmul never liked hearing Sol’s stories after that day. After finding that letter and pretending he never saw anything, Shmul knew that, though like other boys, he’d only have his name to remember his father by. Yet, why grieve someone that was never a hero? Someone lost to the statistics of men that lost their lives in war?

It’s only when he reads the rest of the letters in the middle of the night, quietly shifting through the papers so he wouldn’t wake up his mother, that he learned more things than he could have ever gotten out of Sol.

Shmul Smotritsky senior was an engineer turned soldier, fighting only to make the future safe for his family.

Shmul Smotritsky senior only smiled in pictures when he gazing at his wife, her swollen belly, or one of his newborn sons.

Shmul Smotritsky senior never knew if his younger son, Shmul, made it onto the boat with his wife and Sol; rather, he passed the baby from one person to another, screaming at everyone to “get that baby to his mother! The woman in the brown shawl with the little boy!”

Most of all, that Shmul Smotritsky senior wasn’t a hero to all. He was a hero to his wife, who called him that between scolding him to eat more; he was a hero to his son Solomon, who was still telling stories of his father to the younger neighborhood boys.

Wiping silent tears that pooled in his hollowed cheeks, Shmul decided that his father was a hero as well.