Newark Academy’s Global Speaker Series hosted R&B/blues musician, activist, author, actor and bandleader Daryl Davis. An acclaimed boogie-woogie pianist, Davis has played with musicians Chuck Berry, Jerry Lee Lewis, B. B. King, Bruce Hornsby, as well as Bill Clinton. In addition to music, Davis has devoted his life to improving race relations. In his December 4, 2018 Newark Academy presentation, he told students that ever since being harassed as a child for being the only African-American in a Boy Scouts parade, he has wrestled with the question: “How can you hate someone you don’t know?” 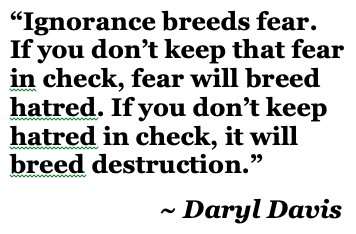 His engagement with members of the Ku Klux Klan (KKK), have been reported by CNN, NPR, and The Washington Post. Davis sums up his advice as: “Establish dialogue. When two enemies are talking, they’re not fighting.” He has been successful in convincing numerous Klansmen to leave and denounce the KKK. He is the subject of the 2016 documentary Accidental Courtesy: Daryl Davis, Race & America, and the author of the book Klan-Destine Relationships. Below is Davis’s TEDx Talk, “Why I, as a black man, attend KKK Rallies,” and a sampling of his famous boogie woogie piano playing.